While we began with rescuing Westies, we have welcomed and found homes for Scotties and Cairns as well as other terriers. While they may look different, many terriers share some of the same characteristics.

Terriers can live comfortably in an apartment or home, but should have opportunities to walk or play outside. They are indoor dogs.


All terriers require daily exercise of walking and/or playing. They are active dogs and are naturals at agility.


All terriers should be groomed regularly and brushed at least once week to keep their coats and skin in good condition. 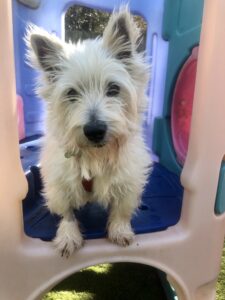 Smart, confident, adaptable, and endlessly entertaining at play, the adorable Westie has charmed owners for more than 300 years. Like all terriers, Westies were bred to work alone. (You can’t go down a rathole with your terrier—and even if you could, would you really want to?) This terrier independence can make training a challenge, but thanks to their keen intelligence Westies will take to training with time and patience. Despite their size, Westies are sturdy, no-nonsense dogs that require little pampering.

The origins of the West Highland White Terriers, also known as “Westies”, are somewhat cloudy, but accounts as far back as the early 17th century, show James I of England (1566-1625), sent a request for 6 little white “earthe dogges”, to be presented as a gift to the King of France.

Today, there are 25 Terrier breeds recognized throughout the world. Every one of them was, at one time or another, derived from the British Isles. Westies were bred in the Highlands of Scotland, the northern region of the country, but have evolved to today’s breed standard primarily on the west coast, hence, the name West Highland Terriers.

The word terrier comes from the Latin word ‘terra’ meaning earth. Specifically referring to dogs that go underground to pursue their prey. Westies and terriers in general are famous for their instinct of hunting vermin, rats, fox and rodents.

The Westie was originally a brown, short-legged dog. This version of the dog was most closely associated with today’s Cairn Terrier and is from what today’s Westie descends from. This scruffy terrier, associated with peasants and working classes, was not necessarily revered by the wealthy aristocrats, and was often times abused, abandoned and in general, treated as a poor worker.

Over the years, the breed was bred white and it’s unworthy, working class stigma evolved into that of a much-revered family pet. Col. E.D. Malcolm is credited with developing the breed standard, by coining the breed name and creating the West Highland White Terrier Club.

Commonly, Westies have bright, deep-set, almond-shaped eyes that are dark in colour. Their ears are pointed and erect.

The sometimes self-willed Westie has a streak of independence, yet can be a fiercely loyal family member. His bark and his gardening skills are sometimes out proportioned to his size. He is a sturdy, hardy fellow who is quite happy to out-walk any family member, no matter how fit. The scrappy playfulness is infectious to watch and defies anyone not to smile while watching them at play!

Like all breeds, there may be some health issues, like cardiac disease and patellar luxation. Some dogs may be faced with these health challenges in their lives, but the majority of West Highland White Terriers are healthy dogs. They are also susceptible to Malassezia Dermatitis (yeast infection of the skin), see our Health and Skin Problems page for more details. 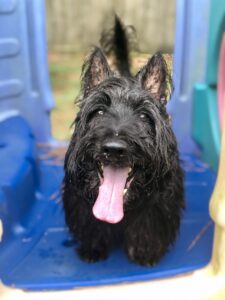 The breed’s fans will tell you that once you own a Scottie, no other dog will do. Scotties are stable, steadfast companions. They aren’t emotionally needy dogs, but Scotties do have a complex, almost-human character that’s instantly endearing. Their aloofness toward strangers makes them excellent watchdogs. The breed’s hunting instinct remains strong, which can complicate life for the neighbor’s cat, and Scotties are known to be cantankerous around other dogs. Clever, independent, and bold, Scotties must be taught good manners in early puppyhood.

Like the Westie, the Scottish Terrier’s exact origins are unknown, but he is likely of Norse descent. It is believed the Scottie descends from the Blackmount region of Perthshire (central Scotland). While Westies, Skye, and Cairn terriers have evolved somewhat, the Scottish Terrier, often called the “Scottie” appears in most depictions, much as we see it today.

Terriers were a necessary companion for gamekeepers, whose job it was to keep the land from being overrun with vermin such as badger, fox and otter. Like the Westie, they were not bred for their looks, but rather their hardiness, gameness and courageousness. No record of lineage was maintained, but rather a breeding requirement of taking only the smallest, gamest and toughest dogs was closely followed. This ensured a standard of dog that was the blueprint of a sturdy breed, a trait necessary to survive the wilds of Scotland.

The Scottie mostly stayed within the Scottish borders until the late 1870’s when English Army Captain W. W. Mackie imported the first know Scotties to England. It took another two decades to settle on a breed standard for the Scottie. And eventually, the breed made its way over the Atlantic, to America, in the 1890’s.

The earliest recorded kennels having produced quality stock from which many of today’s Scotties have been bred are those of Mr. J. H. Ludlow. Mr. Ludlow founded the Scottish Terrier Club of England and bred many of the breed’s earliest champions.

The Scottish Terrier is a small, compact, short-legged, sturdily-built dog of good bone and substance. His head is long in proportion to his size. He has a hard, wiry, weather-resistant coat and a thick-set, cobby body which is hung between short, heavy legs. These characteristics, joined with his very special keen, piercing, “varminty” expression, and his erect ears and tail are salient features of the breed. The Scottish Terrier’s bold, confident, dignified aspect exemplifies power in a small package. The coat is traditionally black, but is also found in brindle or wheaten colors as well.

Scotties are territorial, alert, quick moving and feisty, perhaps even more so than other terrier breeds. The breed is known to be independent and self-assured, playful, intelligent and has been nicknamed the ‘Diehard’ because of its rugged nature and endless determination. Like all terriers, Scotties can be of an independent nature and as a result, difficult to train. They are diggers by nature, so don’t expect otherwise! Scotties thrive on positive reinforcement and are fiercely loyal. Their playful nature makes for a great family pet and companion. 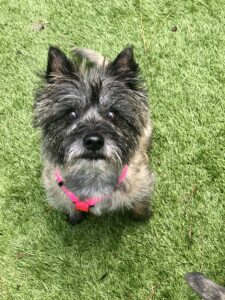 The Cairn Terrier is an affectionate and playful companion. They are best known for their fearless attitude and high energy levels, as well as their strong personalities. The Cairn has a love for games, and he will eagerly play ball for hours, followed by a game of chase. This dog is nothing short of an endearing, loving playmate for the entire household.

Obedience training for the Cairn can be trying on your patience. Just keep in mind that your dog is smarter than many other breeds, and will often seek an answer to the question, “Why should I?” Encourage good behavior regularly, and then he will quickly learn the rules of the house. However, the Cairn loves to get away with mischief, and he will quickly rule the house if given free reign. This adorable little busybody’s natural, gorgeous disposition just makes it too easy!

From Wikipedia:
“The Cairn Terrier is one of the oldest of the terrier breeds, originating in the Scottish Highlands and recognized as one of Scotland’s earliest working dogs. The breed was given the name Cairn, because the breed’s function was to hunt and chase quarry between the cairns in the Scottish highlands.”

The Cairn Terrier has a harsh weather-resistant outer coat that can be black, cream, wheaten, red, sandy, gray, or brindled in any of these colors.

Cairns are active, game, hardy, small working terriers of the short-legged class; very free in its movements, strongly but not heavily built, standing well forward on its forelegs, deep in the ribs, well coupled with strong hindquarters and presenting a well-proportioned build with a medium length of back, having a hard, weather-resisting coat; head shorter and wider than any other terrier and well furnished with hair giving a general foxy expression. 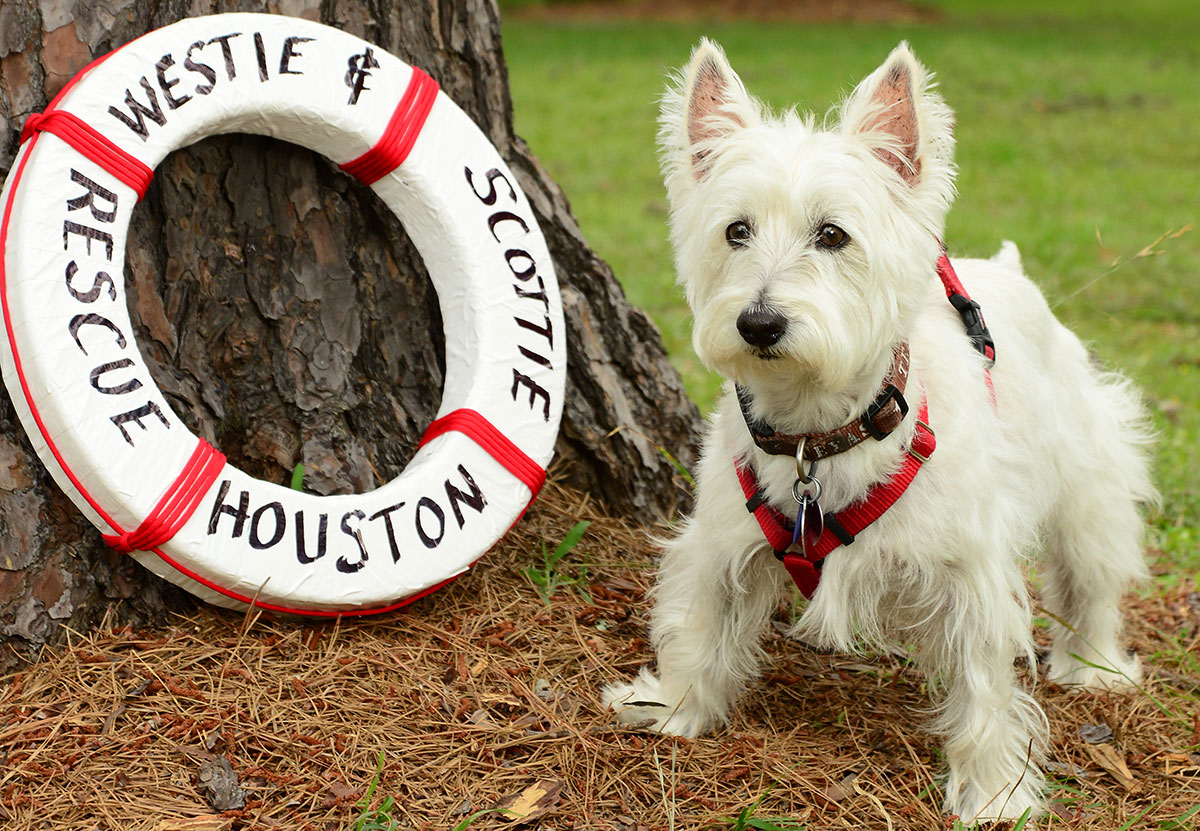